From Lina Bo Bardi to Renzo Piano: When Drawing Translates the Experience of Space

If today technologies are emerging for different forms of representation and interaction with drawing, understanding how architects communicate through hand-drawn strokes can be essential to delve into the topic of architectural visualization. Through the simplicity of gestures, small texts or a collage of references, it is possible to translate ideas in an innovative way, unlike the ways that a render can present. For this reason, we highlight here the work of great names such as Lina Bo Bardi, Renzo Piano, Pezo von Ellrichshausen and Mikkel Frost, who, using different techniques, reveal different ways of representing a project. 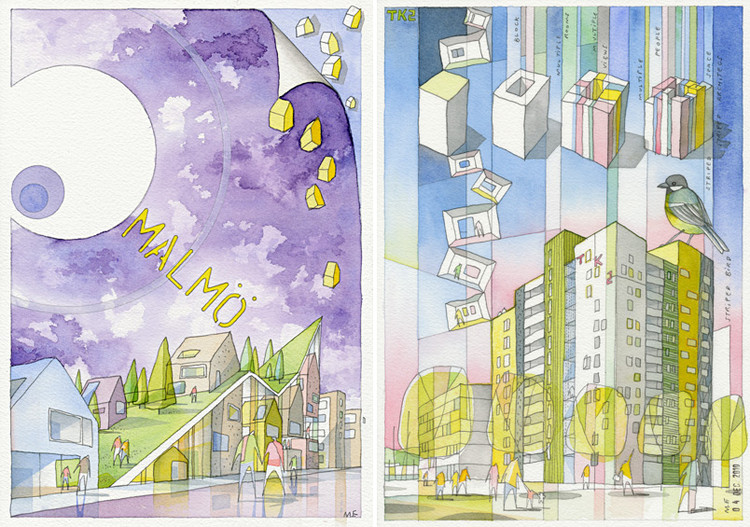 When we think of handmade drawings and sketches, we usually think of them as a tool to give impetus to initial ideas. Lina Bo Bardi in her illustrations showed that she started her projects at the end. From the beginning, the embryonic ideas of its future buildings are accompanied by people using, living together and intervening in the building itself. After all, it is an architecture that only comes to life from the experience it proposes.

Therefore, it is not difficult to find drawings made by the architect where the scale of the people is far from a verisimilitude with reality, but rather drawn to highlight the potential of the spaces. In the absence of humans, it is possible to see how Lina already imagined her projects with cracks, spontaneous vegetation or, even, through small texts that induced what actions could be carried out in space, such as “bar dos 3 arcos / pinga+caranguejos”.

The winner of the 1998 Pritzker Prize, presents through his sketches the most varied intentions of his projects, showing in many of them the concern with the human scale, the dialogue with the immediate surroundings and more technical solutions, which include studies of insolation and comfort.

The use of colors, arrows and textual elements stands out here, which not only make the drawings more didactic, but also help to illustrate the architect’s design reasoning.

The Chilean office, headed by Mauricio Pezo and Sofia Von Ellrichshausen, stands out for a deep formal composition in its projects, which are the result of experimentation carried out through the material and the drawings they make for each of them.

In this case, we emphasize oil painting, a technique that allows architects to explore the textures, colors and light of each building or environment. From the brushstrokes, another materiality is created for the project, unveiling different sensations and emotions that the construction can generate in the user.

Mikkel Frost, founding partner architect of the CEBRA office, after the conception and before starting the construction of several projects, creates the Toons. Illustrations that, according to him, help to remember the purpose behind each work.

“I usually say that if you can’t tell the story on an A4 size sheet, you’re doing too much or making it too complicated. So the “Toons”, as I call them, are not sketches. They are made after these, when most architectural decisions are already made. In this sense, they serve as a reminder of what the project is about in its entirety. Sometimes we tend to forget this when we start building, so looking back at these drawings can be a big help.”, says the architect.

This article is part of the ArchDaily Topics: The Future of Architectural Visualizations, proudly presented by Enscape, the most intuitive real-time rendering and virtual reality plugin for Revit, SketchUp, Rhino, Archicad, and Vectorworks. Enscape plugs directly into your modeling software, giving you an integrated visualization and design workflow. Every month we explore a topic in-depth through articles, interviews, news, and projects. Learn more about our ArchDaily topics. As always, at ArchDaily we welcome the contributions of our readers; if you want to submit an article or project, contact us.